For a long time, I have wanted to create my own Lego set, so I decided to build a model of our Stone Oaks apartment. Here is the video:

From start to finish took several month and many purchases on Brick Owl (which is like eBay for Lego). The floor plan was a standard 10 inch base plate that was built up to comply with the MILS Lego board specification.

The main Lego colours that I used were ‘tan’ for the walls, and ‘dark tan’ and ‘dark brown’ for the floors. Much trial and error was employed to create comparable Lego equivalents of real life objects. For example the television and sofa took several attempts with different parts to get something satisfying.

Other parts, I had better luck. It so happens that there is a 1x6x5 transparent black brick that looked very much like our patio doors (see below) A view of the living room from the balcony

The kitchen was fun to build. Since Lego at minifig scale is very low resolution, a lot of the design is there to give an impression of the object. For example, I had to make the microwave out of three layers of plates. Also to give an impression of texture, the smooth kitchen floor is made of tiles (that have no studs) whereas the carpet is made of plates (with studs)

Angles are difficult to express in a build system based on squares. The counter below is attached with just a few studs at a 3:4:5 triangle angle so that the holes in the bottom line up with the studs on the floor. 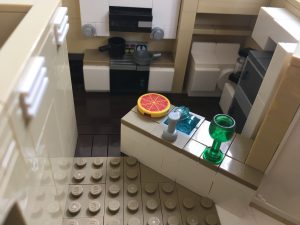 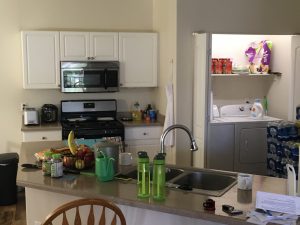 Most Lego pieces are cheap to buy (a few cents), but a few are expensive due to the limited amount that were produced. The metallic silver tile on the front of the dishwasher costed $2 . For the most part, I tried to avoid too many of these costs however sometimes you just have to get the right piece for the job. 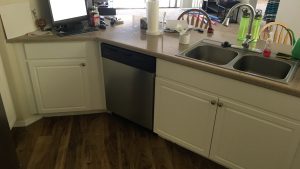 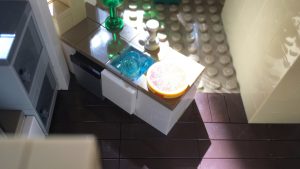 Building this model was very rewarding and we will always have a memento of our first apartment in Arizona.